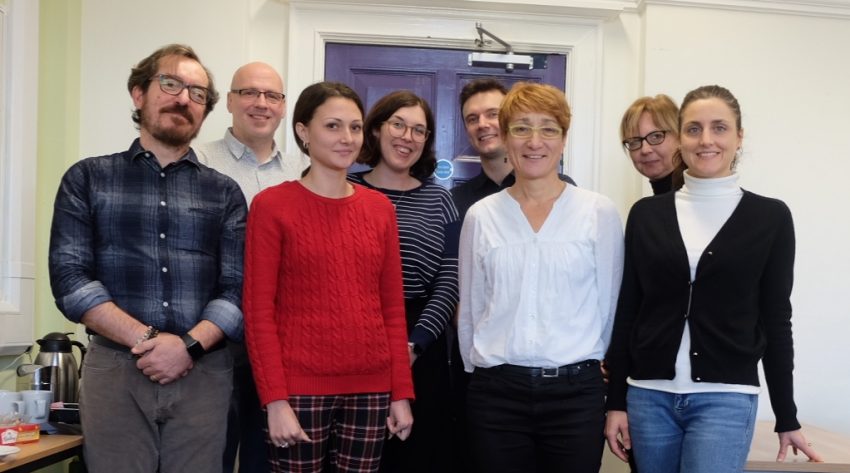 DesignMyFuture aims to reduce early school leaving, promote positive decision making and prevent young people from entering the job market with insufficient skills. The project was officially started, or “kicked off”, in Leeds (UK) on 28 and 29 November 2019.

15 partners from 6 organisations in 5 countries came together to confirm their roles and responsibilities in the project, and perhaps most importantly to get to know each other and establish effective ways of working across borders.

The first day of the meeting took place in the Carnegie Pavilion at Headingley Cricket stadium, a well-known international sports venue steeped in history.

Mhairi Beaton and Marc Fabri from host Leeds Beckett University welcomed all partners and introduced project goals. Partners learned about financial regulations, timesheets and general record keeping from Lucy Scott – this sounds (and probably was) quite boring, but it is important for the smooth running of the project.

All project partners then considered several key questions that will guide the DesignMyFuture project. For each of the four intellectual outputs, we asked ourselves how the initial research can inform the final outcome:

Considering these questions helped us decide on the next project steps: what research instruments to design, how to recruit participants for our research activities, what degree of participation we aim for. Project partners agreed that the voices of all stakeholders needed to be heard: young people first and foremost, teachers as they are best positioned to spot problems arising and provide support, also parents and carers, youth workers and policymakers.

The team from Ahead Partnership, Lola Wilson and Sophie Greenwood, presented a comprehensive dissemination strategy and got all partners moving about and involved in an ideas-generation session. We agreed a schedule for blog posts (this one being the first on the list) and who to involve as potential project ambassadors, e.g. individuals who overcame adversity and made positive decisions about their future.

Another important discussion revolved around the project name DesignMyFuture. It wasn’t actually the original name written on the funding application… that was the acronym PICAP (Promoting Informed Choices for All young People). However, that doesn’t exactly roll off the tongue so we spent some time exploring alternative names which captured the spirit of the project and aims. Here’s a selection of ideas that eventually led us towards DesignMyFuture:

On the evening of the 28th partners convened at Whitelock’s Ale House, Leeds’ oldest pub, for a pint of British ale and traditional pub food – although some insisted on drinking lager beer… oh well, each to their own.

On the second day we met at the university’s Headingley Campus, a historic campus environment which is surrounded by the beautiful Beckett Park.

We continued discussions about research questions and instruments. Partners agreed to use the time until the next meeting in March in Palermo to collaboratively design these research instruments, trial and refine them.

The team from CESIE, Italy, presented the project’s evaluation strategy which was agreed by all partners.

Overall it became clear that the DesignMyFuture kick-off meeting was a successful get-together by very dedicated and conscientious project partners. We are looking forward to working together and meeting again in Palermo in 4 month’s time.