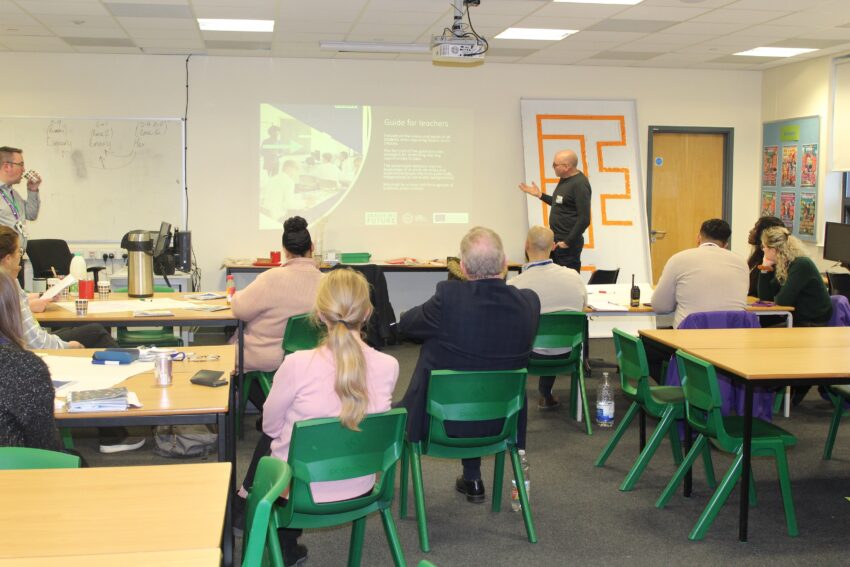 50 young people aged 11-16 years old and school staff from the Leeds Learning Alliance attended the event at Carr Manor Community School to find out more about the project and get a first look at the resources produced for each Intellectual Output (IO).

In the first session students were shown the game concept (IO2) by Dr Marc Fabri and then took part in a workshop in small groups to ask questions and give their feedback on the game concept. The critical feedback received was enthusiastic and extremely helpful to the project partners in the finalising of the game, with all of the young people involved reporting that they would use the game when it is available online. The young people also had several useful ideas for further disseminating the game to young people across Europe which Ahead Partnership are now investigating.

In the second session qualified teachers and school support staff examined the Teacher Guide (IO4) and Parent Guide (IO3). The feedback on the guide for teachers was particularly positive, with attendees sharing a number of ways they felt they could be used in their own organisation. Attendees also highlighted a desire for the Parent Guide to be translated into more European languages to reach as many parents/carers as possible within their own communities. Multiple language translations (outside of the five partner languages) of the Parent Guide are now being explored by the project team.

Teachers and school support staff were also the very first to see one of the Teacher Resources (IO5) produced by The Arctic University of Norway – University of Tromso. They were shown one video from the suite of films that will be made available, and were once again keen to incorporate the resources in their own staff training and development once they are live to the public.

Simon Flowers, CEO of the Leeds Learning Alliance, said: “The staff and the pupils all found the sessions interesting and were pleased to be involved in the UK Multiplier Event. Our team are now considering what we can learn from the project and look forward to using the resources and working in further collaboration once the resources have been released.”